Founded in 1955, the Enfield Archaeological Society is active in carrying out research and fieldwork in and around the London Borough of Enfield, in order to understand and preserve its history.

Our main aims are: to promote the practice and study of archaeology in the district; to record and preserve all finds in the borough and encourage others to allow their finds to be recorded by the Society; and to co-operate with neighbouring societies with similar aims.

Membership is open to anybody with an interest in the past.

All members of the society over the age of 16 are welcome to dig with us – no experience is necessary. We typically run at least one dig a year in the summer, on the site of Henry VIII's Elsyng Palace with other work often cropping up through the rest of the year.

The Archaeology of Roman Enfield and its Roadline Settlement 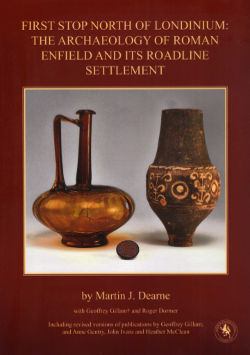 A definitive description and analysis of all the known Roman archaeology in the north London borough of Enfield, this monograph brings together antiquarian finds and re-presented and augmented reports on work from the 1950s to 1970s with the more recent excavations of the EAS as well as Museum of London Archaeology.

With prefatory chapters on aspects of the area including its prehistory, the volume documents what is known of the settlement that grew up here alongside Ermine Street, the road itself, a possible tannery, other settlement sites and often higher status burials.

A synthetic chapter examines the role of all small roadside settlements around Londinium in terms of function, chronology and their relationship to the provincial capital and discusses the possible economy of this area of the Lea valley.

With full illustrated stratigraphic and finds reports for over 45 individual sites (including samian ware, brooches, metalwork and important Roman glass finds), it presents the evidence for what may have been a broadly rural landscape, but with a quasi-urban settlement that may have reflected the needs of a cursus publicus system operating along one of the main roads of the province.

Send a cheque payable to "The Enfield Archaeological Society" together with your postal address to:

It was an unremarkable but satisfying end to this year's summer dig on the site of Elsyng Palace. After finishing up the few remaining recording jobs this morning, we spent the rest of the afternoon backfilling and returfing trench two.

Don't forget to follow us on twitter and on facebook for updates on post-excavation work, the full results of which will be published in due course in the Society's newsletter later in the year.

Tentative interpretations of the complex features in the west end of trench 2 suggest that the conical feature may be the base of a tall cistern, and the stub of wall next to it possibly a demolished threshold and step leading down to the brick floor. The current hypothesis is that this was associated with one of the palace stables.

Special thanks are due to our members this year, who did a sterling job and endured particularly hostile weather this week. We're especially grateful for the good turnout for backfilling today, which saw us get the job done early for the first time in 15 years!

Sadly, rain stopped play today as heavy showers overnight and all through the morning made the side too muddy to safely set up for our public viewing day, and too wet to do any accurate recording, forcing us off site before 11am.

We're aiming to make an early start tomorrow to get the final planning jobs done before our palace structures will be covered and the trenches returfed for another year.

Not much to report today; heavy rain and thunderstorms all morning and most of the early afternoon made it impossible to do anything much other than take shelter beneath the park's lime trees and savour the cooler temperatures.

We spent most of the dry periods backfilling trench 1, which is now finished and returfed, and part of trench 2, leaving the walls of the barn and associated structural features visible for members of the public on tomorrow's viewing day.

We also managed to get some important drawing and surveying work done, hopefully meaning there won't be much to do tomorrow, since the weather forecast is even worse.

Because of the weather we weren't able to work on trench 3, and if the heavens open again tomorrow, we may backfill it to return to next year.

The record breaking heatwave currently sweeping northern Europe brought work to a crawl this afternoon, on the tenth day of our summer dig on the site of Henry VIII's Elsyng palace, as temperatures in the afternoon crept into the high thirties.

Using improvised shade and staying as much as possibly beneath the canopy of the lime tree avenue, we were able to work in small stints with frequent drink breaks. Overall we weren't able to make much progress beyond topsoil removal in trench 3, which we opened yesterday speculatively looking for the continuation of the brick lined culvert which we found a small section of last year, and suspect may be heading towards the (currently undiscovered) location of the palace's inner gatehouse.

In trench two, we were able to do two small but interesting jobs, the first of which was examining one side of the vaulted drain which runs beneath the southern barn wall.

Excavating a small section next to the drain, we unexpectedly found a course of bricks running alongside it, which at first looked like the drain had a brick offset or a shoulder at the base of the arch.

Expecting to reveal the brick-built side of the drain, we dug down in front of the bricks only to find that they are only a single course set in a mortar bed.

We've nearly reached our allowed maximum depth at this point of the trench now, so unfortunately it looks as though we won't be able to get a good idea of how deep the side of the drain is.

Nearby, at the west end of the trench where we've been excavating an unusual feature including a conical fire pit, we were able to finish removing the rubble deposit next to the pit and the stub of partly demolished wall next to it, revealing a mostly intact brick floor.

The floor is quite limited in extent and occupies a narrow cut in front of the fire pit, the chronology and purpose of which are still far from clear,

Elsewhere on the site, we were able to get some key recording work finished meaning that tomorrow backfilling of trench 1 can begin and perhaps parts of the east end of trench 2.

Hopefully we'll be able to spread this out over a few days, although the forecast tomorrow and over the weekend looks considerably cooler.

Another day of very opressive heat meant slow but steady progress in Forty Hall today as we continued this year's exploration of the 'Long Barn' of the Tudor palace of Elsyng.

Fortunately most of the heaviest work removing indurated layers of brickearth and gravel were finished today, leaving relatively easier tasks to do, mostly in the shade of the park's lime tree avenue.

Yesterday, at the west end of trench 2, we found a very unusual feature set against the barn wall in the form of a conical depression, lined with heat damaged bricks, and containing a layer of ash and charcoal. Although the mortar the feature is set in points to an early/mid fifteenth century date, there appears also to be evidence that the fire pit was incorporated into the later (late 15th/early 16th century) barn, suggesting that it continued to be used.

Exactly what it was used for remains the subject of speculation, particularly why a fire source would have been set into the barn, which we believe was a largely timber-framed structure.

We excavated part of the trench extension which we opened yesterday next to the fire pit, hoping that by revealing more of the area around it we might find more clues as to its function, but have found that the area next to it seems to have been truncated by a rubble filled cut.

What we did find is that the stub of wall next to the pit (which at first we mistook for fragments of a brick floor) is more substatntial than it had at first looked, extending down at least three more courses than were previously visible.

This wall is also a puzzle, since although one end abuts the barn wall, it isn't clear where it runs to.

We haven't excavated enough of the extension along the wall to find this out yet, so this will be a job for tomorrow.

Meanwhile work in trench 1 is essentially complete. The extension to reveal more of the crushed brick deposit showed that it is a wide area of very densely packed brick fragments and brick dust. We excavated a section through it, which showed it to be about 20cm thick and, crucially, that it was filling a shallow depression.

The apparent depression is in precisely the right place to be the remnants of the foundations of the perimeter wall we have been looking for, although evidence elsewhere in the trench may suggest it doesn't follow the exact course we expected.

The only major job in trench 1 now is recording the archaeology before it is backfilled, probably on Friday.

Since the amount of labour required in trenches 1 and 2 has now dropped, we decided to open a third trench today to begin exploring a new research question which arose after last year's dig.

Excavation at the far west end of the barn last year revealed a substantial vertically sided drain, running past the barn's north-west corner.

Based partly on topographic and documentary evidence, we suspect that this drain is heading towards what was probably the inner gatehouse which marked the boundary between the outer and inner courtyards of the palace. In fact, it may be the case that rather than a drain, the feature was a water conduit, perhaps supplying the moat which we know from contemporary documents ran in front of the gatehouse and was crossed by a drawbridge.

Location of the inner gatehouse and moat would be a major milestone in the research of the palace, and although we may not achieve it this year, it's good to be making the first steps in that direction.